Dubbed the “New Parent Leave Act,” SB 654 currently awaits Governor Brown’s signature. If approved, the law will provide six weeks of job-protected unpaid maternity and paternity leave for employees of companies with 20 to 49 employees. To be eligible, the employee must have been employed by the company for at least 12 months, and work at least part time. Current law provides employees of larger companies with 49 or more workers with 12-weeks of job protected leave. If signed, the law will take effect January 1, 2018.

On September 28, 2016, the U.S. House of Representatives passed H.R. 6094 which would delay the implementation of the Department of Labor’s new overtime regulations raising the salary threshold to $47,476 for exempt employees. The bill still requires Senate and Presidential approval. If approved, the bill would delay the implementation of the new salary threshold for overtime exemption until June 1, 2017. The bill will also offer some relief for small and non-profit businesses. We will monitor this bill’s progress through the legislative procedure and update you to any new developments.

On August 29, 2016, the EEOC issued the long-anticipated “Enforcement Guidance on Retaliation and Related Issues” 1 (“the Guidance”), replacing the 1998 Compliance Manual on Retaliation. Importantly, the Guidance is instructive on how the EEOC will interpret retaliation claims. The highlights include:

Protected Employee Activity – “Protected activity” generally includes participation in or reasonably opposing conduct made unlawful by an EEO law, such as filing an EEO complaint, participating in an EEO matter – even if the underlying claim is ultimately unsuccessful. Furthermore, an employer must not retaliate against an employee who has voiced opposition to a perceived EEO violation. Protection for opposition is limited to that in which there is a good faith reasonable belief in unlawful activity.

Employer Actions Potentially Amounting to Retaliation – Employer conduct that might amount to retaliation under the Guidance, includes: engaging in conduct that would deter a reasonable person from engaging in protected activity; examining an employee’s work or attendance more closely; or adversely changing work assignments.

Elements of a Retaliation Claim - A claim for retaliation may be established by showing (through material or circumstantial evidence) that:

To rebut retaliation claims, the employer can seek to establish legitimate non-retaliatory reasons for any adverse action(s) or show it was unaware of the employee’s involvement in a protected activity.

Contact Stokes Wagner for additional information on these guidelines, or for assistance reviewing and revising current retaliation policies and procedures.

In an important decision for employers, a 2-1 panel of the Ninth Circuit recently widened the divide between the federal appellate courts with regard to class waivers in employee arbitration agreements, concluding that such waivers violate the National Labor Relations Act (“NLRA”).2

Historical Background - In 2011, the United States Supreme Court upheld the validity of class arbitration waivers in the context of consumer class actions in the landmark case AT&T Mobility v. Concepcion.3 As a result, employers across the nation have implemented such waivers in their employee arbitration agreements to protect against costly, drawn out class-litigation. Many courts have since upheld the validity of such waivers under the authority of Concepcion. The NLRB, however, has continued to challenge class-waivers in the employment context leading to a divide between the circuit courts.

The Circuit Divide - On May 26, 2016 the 7th Circuit became the first appeals court to adopt the NLRB’s position and strike down class waivers in Lewis v. Epic Systems, holding that class waiver violate Section 7 of the NLRA because they interfere with workers’ rights to engage in concerted activity for their mutual benefit and protection. The 9th Circuit echoed this reasoning in Morris v. Ernst & Young.

Conversely, the 2nd, 5th, 8th, and 11th Circuits have rejected the NLRB’s position and maintain that arbitration agreements with a waiver of class actions are enforceable.

Notably, the court left open the option for “opt-out” provisions in a footnote of the opinion, suggesting that class waivers may be permissible when the employee is not required to sign such waivers as a condition of employment. As such, we recommend revising policies to include an opt-out provision.

Importantly, this ruling does not change the law in most jurisdictions, which have rejected the NLRB’s position, and maintain that arbitration agreements containing class waivers are enforceable.

How Does this Decision Affect You? - At this point, employers under the 9th Circuit’s jurisdiction should assume that mandatory class waivers in employment arbitration agreements are invalid under this ruling. However, there is hope that a full panel will agree to hear the case on an en banc basis. Furthermore, the continued divide between the circuit courts might be the silver lining needed for the U.S. Supreme Court to address the issue.

Unless and until the 9th Circuit reverses its own decision or the Supreme Court intervenes to settle the matter, employers in the jurisdiction of the 9th Circuit should be prepared to adjust to this new ruling. Specifically, we recommend revising current policies and agreements to include “opt-out” provisions. Stokes Wagner will keep you informed as to any changes in the ruling, including whether and when the United States Supreme Court decides to address the issue.

Summary Pay Data – Employers will be required to report the total number of full and part-time employees by demographics in 12 pay bands for each EEO-1 job category according to W-2 wages;

Data on Hours Worked – Employers will be required to report the aggregate number of hours worked by the workers accounted for in each pay-band. For non-exempt employees, employers should consult records already kept to remain compliant with the Fair Labor Standards Act. For exempt employees, employers have the option to report 20 hours per week for part-time employees and 40 hours per week for full-time employees or track report the actual number of hours worked.

How will salary data be reported?

Employers will tabulate and report the number of employees whose W-2 earnings for the prior 12 months fell within 12 pre-identified pay bands.

The pay bands are: 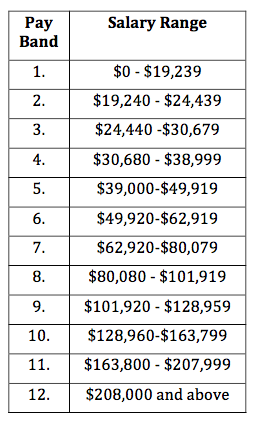 What should you do now?

In preparation for the March 31, 2018 filing deadline, Stokes Wagner recommends the following:

On August 29, 2016, the U.S. Court of Appeals for the Second Circuit joined several other federal courts4, and for the first time, adopted the “cat’s paw” theory of liability in Title VII discrimination claims. The term “cat’s paw” refers to a situation in which an employee is subjected to an adverse employment action by a decision maker who has no discriminatory motive himself but who has been manipulated by an employee who does have such intent to bring about an adverse employment action through his or her own bad acts.

The plaintiff in Vasquez v. Empress Ambulance Service, Inc. was fired as a result of a “he said, she said” situation where Vasquez accused her co-worker of sexual harassment and he concocted a story in retaliation, claiming that she had been sexually harassing him. In her lawsuit, Vasquez claimed that her employer negligently failed to recognize that her co-workers actions were retaliatory. The Court held that an employer can be held liable for acting on bad information from any employee when firing another worker – even a low-level, non-managerial employee.

What does this decision mean for employers?

Proper investigation procedures are crucial. Employers must thoroughly investigate, in a non-negligent manner, all workplace allegations before taking disciplinary action or making a termination decision. Employers should consider the following questions:

Any investigation should be impartial and should consider both claims and all possible evidence. Investigations should never conclude without speaking to the accused and entertaining all of his/her defenses.

This decision isn’t all bad news for employers. The Court stated that an incorrect finding of an employee’s misconduct, without more, is insufficient to prove retaliation. As long as the employer can prove that it performed a good faith, reasonable investigation supported by objective evidence, liability for any disciplinary action will not attach.

In our July 2016 Legal Update, we addressed OSHA’s new rule on the reporting of workplace injury data. As a result of the rule taking effect on 8/11/16, employers who have policies and procedures which mandate drug and alcohol testing after the occurrence of a workplace accident may be open to penalties of more than $12,000 for first time violations and more than $120,000 for each willful or repetitive violation.

While the final rule does not directly address the issue of post-injury drug testing, the penalties stem from the requirement that reporting procedures must be reasonable. OSHA’s commentary accompanying the final rule states that OSHA views mandatory post-accident drug and alcohol testing as a deterrent to reporting, and that employers who enforce such practices will be subject to scrutiny and penalties. Specifically, OSHA’s commentary states that, “Although drug testing of employees may be a reasonable workplace policy in some situations, it is often perceived as an invasion of privacy, so if an injury or illness is very unlikely to have been caused by employee drug use, or if the method of drug testing does not identify impairment but only use at some time in the recent past, requiring that employee to be drug tested may inappropriately deter reporting.”

As a result, employers should evaluate their own post injury drug testing policies and procedures to ensure that the procedure is not retaliatory, does not deter employees from reporting incidents, and is not utilized in situations where drug or alcohol use is very unlikely to have been a factor. OSHA did note that any employer who is required to administer a post-accident drug or alcohol test under the requirements of a State or Federal law will be allowed to continue such testing as compliance with applicable laws shall not be deemed to be retaliatory actions.